I need to start this post with an apology – I’m sure I will offend someone – so I’m sorry in advance! This is only my opinion – take it or leave it!

So many look at Disney through pixie dusted eyes and for some reason are shocked when something bad happens at Disney – guess what people???? Bad things happen everywhere! That being said pixie dusted eyes quickly turn into Disney dollar eyes when something bad happens at Disney – many automatically look to Disney for a payday – reimbursement or freebie. Now don’t get me wrong. I have been known to lodge a complaint or two in Disney’s direction – but only when the problem was under Disney’s control – a dirty room or bathroom, horrible service at an on-site restaurant, a rude Cast Member. Most other things that happen – theft, pushing, behavior of other guests – things that are not within Disney’s control – are not Disney’s fault and why some would blame Disney and expect Disney to compensate them – is something that has always baffled me. Why guests would expect Disney to discipline another guest’s behavior – for example, so many complaining this summer over foreign tour groups – another baffle to me! Disney is a business people – Disney is in the business of making money – foreign tour groups are part of a huge market of visitors that bring large sums of money to them. When you stay at any resort with thousands of other people, you will come across others that don’t behave the way you behave or have the same consideration for others that you do – this is not Disney’s fault – this is part of the world we live in. 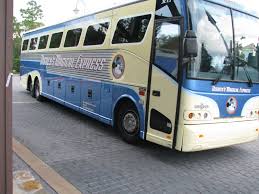 What has triggered me to write this post? The tragic event that occurred yesterday when a Disney Magical Express bus was in an accident with a car. This accident resulted in the death of the woman driving the car. This accident also made me question why there are so many people in the world that seem to be self-centered and lacking compassion. A female guest on the Magical Express bus involved in the accident has been widely quoted as saying her vacation is ruined, her children are traumatized, she was trapped on the bus for two hours while the accident was investigated…..!!! These statements lead me to the following open statement to this anonymous woman because as I read her statements my first thought is that she is definitely someone who now has Disney dollars signs in her eyes:

Really!! Someone died. How is that about you? Count your blessings that neither you or your children were injured. Part of being a parent is teaching our children life lessons. Unfortunately many of those life lessons are taught because of bad things that happen in our life or because of other people’s tragedy. Instead of teaching your children that everything is about them by your actions and statements – why not take the 2 hours you were “trapped” on the bus to teach them a valuable lesson about life and death. If this were your family member, wouldn’t you want a full and complete investigation of the accident – no matter how long it took? Give some thought and compassion to the young (33 yr. old) bus driver who now has to live with the fact that someone died. Your vacation is ruined – again, Really!!! You are in control of your own destiny and at this point the destiny of your children – your vacation is ruined if you choose to let it be ruined. I will admit that being on the bus involved is sad and scary, but children are the most resilient creatures and will only be traumatized and have a ruined vacation if you tell them to and if you continue to behave in such a way. Somebody died – it isn’t about you – don’t put your negativity and dispassion onto your children and they won’t be traumatized.

I surely won’t be surprised to read somewhere soon that this anonymous woman has filed a law suit against Mears Transportation and Disney – after all, she thinks her vacation was ruined and her children have been traumatized and she is most likely looking at the world through Disney dollar eyes.