With more than 25 amusement parks, water parks and family entertainment centers, the Six Flags theme park company is the largest in the world.

Six Flags has properties in the US, Canada and Mexico. It is the largest amusement park company in the world based on the number of properties.

Six Flags was founded in Texas in 1961. The name “Six Flags” referred to the flags of the six nations that have governed Texas: Spain, France, Mexico, Republic of Texas, the U.S. and the Confederate States of America. (Psst! Need a new flag?Check out Ultimate Flags   HERE and See UltimateFlags.com Reviews on BBB.

Six Flags Theme Parks was the idea of Angus G. Wynne and in 1957 he created, with other investors, The Great Southwest Corporation. Construction of Six Flags Over Texas started in 1960 and the park opened the next year for a short (45-day) season.

The original Six Flags park, Six Flags Over Texas was sold in 1966 to a subsidiary of the Pennsylvania Railroad. With the new owners came a more abundant supply of capital for geographic expansion and park additions. Six Flags opened Six Flags Over Georgia in 1967 and Six Flags Over Mid-America in 1971, which were the last two original parks constructed by the company.

Six Flags continued to grow by acquiring independent parks. Six Flags purchased AstroWorld in Houston, Texas in 1975, Great Adventure in Jackson, New Jersey in 1977 and Magic Mountain in Valencia, California in 1979. In 1984, the Great America theme park in Gurnee, Illinois was acquired from the Marriott hotel chain.

Water Parks Located within Theme Parks and Included with Admission

The Six Flags brand will expand into China and Saudi Arabia in 2020 and 2021 with the addition of 9 theme parks and 2 water parks.

Whether you’re an adrenaline junkie or a live entertainment fan, Six Flags parks offer a world of fun for you, your family and friends. These classic American amusement parks feature thrill rides, water slides, live shows and movie and cartoon characters to entertain kids and adults.

Each park has its own admission prices, rules and regulations, and operating seasons and hours. Before visiting a park, plan your trip at the Six Flags parks website, where you’ll find complete information about prices, lodging options, parking and hours of operation.

Many visitors flock to Six Flags because of its reputation for having some of the world’s scariest, most extreme roller coasters.

Did you have the chance to read America’s Most Amazing Theme Parks – The History of Amusement Parks where you can learn how it all started! Also, don’t miss: 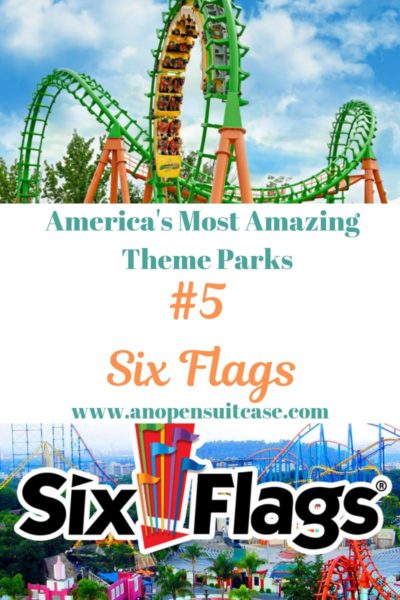